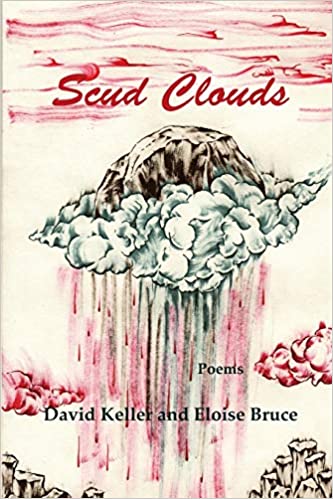 This patient story is adapted from the foreword of our new book of poems (Scud Clouds by David Keller and Eloise Bruce) about our journey since David was diagnosed with CADASIL.  It is a chronicle in poetry of our experiences with this disease as husband and wife.

We are poets and for many years we have written about our life both separately and together. This book is a journey that began in earnest when David’s Uncle George was diagnosed with CADASIL.  The trajectory of the disease was not identified before George Keller was diagnosed, though it is certain the gene had been passed down for a very long time. However, David’s grandmother and his father died in their fifties before their symptoms presented.

David like everyone with CADISIL is in interesting company; it is thought that the Victorian critic John Ruskin suffered from CADASIL. Ruskin reported in his diaries having visual disturbances consistent with the disease, and it has also been suggested that it might have been a factor in causing him to describe James Whistler’s Nocturne in Black and Gold—The Falling Rocket as “asking two hundred guineas for flinging a pot of paint in the public’s face”. The philosopher Friedrich Nietzsche may have had CADASIL rather than tertiary syphilis; and both Felix Mendelssohn and his sister Fanny likely had the disease. Even today it is often misdiagnosed as Parkinson’s or MS. Though Willem de Kooning had Alzheimer’s and not CADASIL, David was fascinated by a visit to MOMA with Baron and Janet Wormser. He remembers Baron speaking about what he saw as the positive effects of dementia on de Kooning’s paintings of that last and late period. David also sees the mysterious ways in which his dementia has shaped his writing since he was diagnosed.

For David’s family it presents very late. David was finally diagnosed in 2011, when he was about to turn seventy. The journey toward that diagnosis was not fast or direct. David was having odd symptoms that included passing out, hallucinations, loss of executive function and balance. When he was writing he would sometimes slump over and wake later. Once he was supposed to pick me up at the train station and I waited for several hours, and when I finally arrived home he had covered the floor with pots and pans and had put one piece of dry dogfood in each. We began getting late notices because he wasn’t paying the bills, and at one point he told me there was no money in the bank to buy groceries. Bills from odd purchases, like a really expensive life-insurance policy, came in the mail. At the time David was working as a carpenter, and he could no longer safely go up a ladder. There were visits to the emergency room, doctors, and many tests that baffled. We were trying to find a neurologist who knew what CADASIL was, much less having treated it.

In 2011 we finally ended up at the University of Pennsylvania, with a brilliant diagnostician, Murray Grossman, who confirmed that it was CADASIL and pointed us to David Lynch, a specialist in pediatric neurology but who had seen the disease before and had seen it in adults. Finally, David had the blood test that confirmed the he had exactly what we thought, a form of dementia that is little understood and has no treatment or cure.

David continues to write, though he has trouble with the computer. He published a book of poetry in 2014.   I continue to work part-time as a teaching artist as I have done for many years. We go once a year to visit our current neurologist Dr. Gediminas Gliebus, who always comments on how well we deal with the disease; I think that is largely because David is a very happy person. We also have some support systems that have worked pretty well so far. Like all of us, we live in a house of cards that could tumble at any moment.  We sometimes read posts from members of the CADASIL Facebook group and so many people have debilitating migraines which is not one of David’s symptoms. We thank God for that.  We also have no children and David’s two sisters do not have the disease.   Our nieces and nephews and their children and grandchildren have escaped this fate.  We are grateful to God for that.

We decided to make these poems public because there are so many families being affected by dementia of all kinds, and, having had this experience, we know how difficult it is for people even now to speak about it. We don’t intend for this to be a how-to book because that is not the way poetry works. We offer these poems to do what poetry does in all if its elusive and mysterious ways.  We are including a few poems from the book here for the CADASIL community.   The book is entitled “Scud Clouds” and is published by Ragged Sky Press.  It will be available at Amazon and Barnes and Noble in the early summer of 2020.

There we are, at a picnic table in New Hampshire,

and she tells me her husband had Alzheimer’s disease.

I question her, saying I, too, have begun

to have memory lapses now and again,

and that I worry. She says, I’ll give you

the numbers of some eminent New York doctors,

who will tell you, you are wrong. Call me,

and we parted at the end of the evening

as we do every eight years, on average.

Every year on my birthday, I get

a letter from an old friend, and I

send one on hers. We each worry

that the other has died.

This May I got only a cryptic note, saying

she would write when she had good news.

I wonder what she means.

And I wondered why I mostly include the weather

in my poems. Today, after the snow stopped,

long enough, so it just stops. It had snowed a foot

during the day, boring, nothing else happening—

and the dog groans, softly.

Last night my wife and I

including a flyer for a special

on pot roast, which she did not think to write down.

But when I’d finished the shopping I could not

remember the last thing I was supposed to get

from the flyer and so didn’t buy it.

Oh, to have forgotten a roast so fast.

that I was forgetting something, something.

And my wife was distraught and annoyed

one more time. One more not, could not.

to curse. This is how my life proceeds,

nothing systematic, even the way

the mind quits after a long day, going

away. I am sorry, my love, sorry again.

It is not the way I’d expected, again.

I include it so that I may recall how life was:

sad, though not gloomy, a day of melting snow.

When we are gone, my love,

rabbits will still breed and rest under our sugi pine.

The bones of our dogs will still rest in its roots

while our nieces and nephews dispose of our paper lanterns

and haul our tansu chests and Nakashima table to the east

and the west, to place them under new eaves.

Children will still walk past

without stopping to gather small pinecones.

Sometimes the little girls will cry

because of some cruelty at school that day.

Miles away the beach and the ocean

would still recognize me and I would speak

words of love to you, I would, if I still had breath.

The Possibility of Silence

From the front, just another of the brownstones

on the block in Philly, but once you enter the long hall

you come to your room, two rooms really,

one that has a large, round bathtub in its center

and, beyond that, the back entrance.

Once there you pass to a yard

almost filled by a picnic table, through another door,

and you’ve left the house and yard already

and you could turn left or right for a walk.

The sun’s barely up, though dusty, the light

squeezed dry, the row of small shops and a tree,

You seek nothing here but a breath of the daylight

before you leave for the lecture you’ve come for.

That’s hours away, after breakfast, a couple of stale Danish

and a cup of coffee from a mug left on the table. No grapes.

in the dream you will have of this in the future

or the evening that led here after a long day’s work, here

being a Cuban restaurant and a table for you both outside.

Everything has taken an oath of happiness. Have

another glass of wine, as fall begins once more.

It’s only a short trip to your car from the table, and to bed.

Nothing in this dream will make a difference

when you leave. You are grateful for it all

and the laughter. Even for the bathtub you couldn’t

figure how to empty and so left full of water.

There is nothing to regret. It will not be filled with pain,

or not for long. Leave laughing. Goodbye.