The fact that CADASIL is passed on genetically can be heartbreaking for families such as Cayla Carney’s. But the disease that is affecting her, her brother, and mother, has also inspired Carney’s big, Midwest Irish Catholic family to reach out and raise funds so that a cure may sometime be found.

Francis Carney, Lois’ husband and Cayla’s father, and several of Francis’ brothers, are holding a fundraiser July 27, 28, and 29 in the Carney hometown of Cedar Falls, Iowa. All the money raised from the weekend events including bowling and a dinner will be donated to  the CADASIL Association. More information about the event is available at the association’s Facebook page https://www.facebook.com/CADASIL.Association/

Cayla Carney, 46, was diagnosed with CADASIL in August 2017. While not formally diagnosed because he is so unwell, it is believed her brother Craig Carney, 58, also has it. And her mother, Lois Carney, 76, was awaiting her diagnosis as of early spring.

All had had migraine headaches throughout their lives. But it wasn’t until a couple of years ago that the family heard about CADASIL, as Craig’s health took a steep decline. “He was a real Type A personality and when he went into a big depression it was very clear something was wrong,” Carney said. Craig, who had had a high-powered career in the homebuilding industry, suddenly couldn’t find his way home, to the job site, and couldn’t keep up his apartment. After he started having seizures, the family moved Craig into his parents’ house in Iowa. He is now in a nursing home.

Then in the spring of 2015 Cayla had a stroke. “I pooed-pooed it away,” she said, after a doctor told her it could possibly be traced to an auto-immune disease. “They said I had sticky blood.” But she started seeing a neurologist. She was 45.

Then in May 2017 while she was working at home in Parker, Colo., a suburb of Denver, Carney suddenly couldn’t speak. Before she blacked out, she was able to call her wife, Karen, who called the ambulance. “I spent the next three or four days in the ICU,” she said. “They thought I had a stroke but were unable to find it in the MRI.” 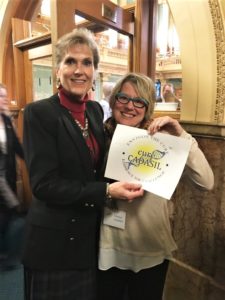 It wasn’t until after talking with her mom, who also had two strokes, that she started to wonder if her problems were connected genetically. She was referred to a University of Colorado vascular neurologist and while waiting for an appointment, started reading up on genetic brain diseases.

She found her symptoms and medical record findings were similar to Lois’ and Craig’s, with the phrase “hyper intensity” cropping up frequently. She underwent genetic testing and in August 2017 was diagnosed with CADASIL. “It fit like a glove,” she said.

Today Carney is unable to work at her former job as a large loss insurance adjuster. “It required a high level of technical knowledge and I had a hard time focusing on the details. And my balance is off.” She is considered disabled. Two overwhelming symptoms Cayla has experiences are migraines and fatigue, affecting everyday life.

Through the difficult times she  maintains a positive attitude. “I know how important it is to keep my stress level down; I’m trying to do all the right things.” She is also volunteering with dementia patients and is becoming active in the rare disease community. Cayla was able to attend a Colorado Rare Disease Day event in 2018 to advocate for CADASIL.

Cayla’s Uncles in the Carney family have been busy planning and advocating for CADASIL on behalf of her family, they also had a story published in the Cedar Republican.