This is an edited version of a post Robert shared on FaceBook and used with his permission. Thank you Robert for sharing your story, it will help many people also on a journey with CADASIL.

I’m 50 years of age now and when I was 38, my wife was pregnant with our daughter and we were looking to buy a new house. After looking one day, we made a stop at Walmart and while we were walking towards the store hand in hand, I noticed that I could not see her in my peripheral vision. I thought this was strange… but continued with our shopping. Once back in the car.. two fingers on my right hand went numb and then the tip of my tongue went numb and I could not speak properly or understand what my wife was saying. This lasted for a few minutes and resolved. We returned home and I went to bed. My wife made me an appointment with our general practitioner and a week later the doctor was certain I had Multiple Sclerosis (M.S.) and referred me to a specialist who didn’t really agree. After a lumbar puncture ruled out M.S. they did an MRI of my brain. 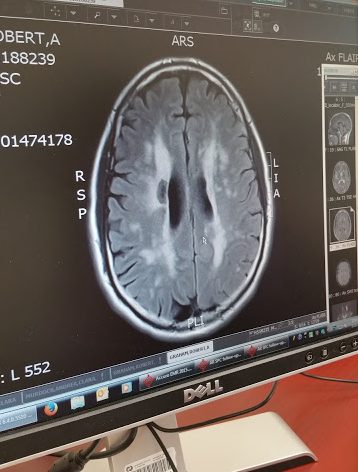 What they found was extensive scaring on my brain. This was the aftermath of many ischemic events that occurred in the past and that I had really no knowledge of. I was however, a recovering addict and wrote off a lot of these weird things as fallout from many years of drug use. Things like talking to someone and garbling or not pronouncing a word. I also found that my memory was failing more, but again… wrote this off as collateral damage from drug addition. So, with the MRI results and it looking more like a vascular problem in the brain, I was referred to genetics where a test was done and I was confirmed as having CADASIL. CADASIL is an acronym for (“Cerebral Autosomal-Dominant Arteriopathy with Subcortical Infarcts and Leukoencephalopathy”). This is a very rare genetic disease that affects the micro blood vessels in my brain and they fail over time and don’t function properly…. from what I understand. I’m having issues with executive functioning and was involved in a study at Health Science Center in Winnipeg, Manitoba, Canada for people with brain injuries and executive functioning where I have learned some tricks to make day to day life less stressful. There is no treatment for this disease, but some great info and support from the CADASIL group on FaceBook. I’m not looking for sympathy, but rather a way to educate others and bring awareness to this disease. Many people are being diagnosed with Multiple Sclerosis as it mimics some of those symptoms.

Thanks for taking the time to read this..