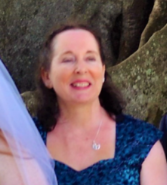 I was 13 years old when I had my first TIA.  I lost feeling in my left hand, left side of my tongue, sight and could not speak properly. I threw up 15 times, before a doctor gave me a knock out drug into my butt. I have continually suffered from these since.

Being an Australian Citizen no one over here knows anything about CADASIL. In fact, still today in 2021 I have to get doctors to look up my disease.

At 13 I was told I suffered from Familial Migraines. It was not until 2017 that I finally received the CADASIL diagnosis.

I am often left for several hours in agony while I wait for the doctors to catch up and knock me out. In 2018 I spent 9 hours in extreme agony (I liken my pain to a metal skewer stabbed into the eye numerous times) before becoming an extreme emergency with a blood pressure of 353/250! Yes I should have been catatonic, but I never faint. I just felt the pain.  (This has now happened numerous times.) That happened to be my first major stroke. Causing my white brain matter in that area to quadruple in size (from about sultana size to plum size on my MRI.) I lost use of my left hand, likening it to cutting the strings on the puppet of the puppeteer. After 3 months of rehab I am mostly normal, except for the continual equilibrium problem and major headaches.

Don’t get me wrong, I am not a depressive person. Luckily I married at 21 and am still married 28 years later. Had my two children by the time I was 26 and taught primary school for 25 years.

What does get me upset is the fact that I can no longer work at 49 and that I have probably passed it down to my children. Not something I would wish on anyone.

I would like to do a fundraising walk over here in Australia. Not only to raise funds for the future sufferers but to get the message out there about CADASIL. I need to do this before my parents pass away and  I no longer have support. There is no rare disease day in Australia!

My cousin who experienced his first TIA at 30, passed away at 59 last year from CADASIL. And here’s the kicker, he only had CADASIL. I now have CADASIL, Hydrocephalus(diagnosed 2008), VP shunt put in in 2014, sudden onset sugar diabetes, and Vitiligo. My body is biodegrading from the inside out!

Reading that CADASIL was first discovered in 1977, simply amazes me! I have even had doctors call me a liar before I was diagnosed when I described my previous symptoms. It is extremely frustrating in Australia. Or the classic was from the leading emergency doctor on duty at the time,  “Your medical history is too extensive for me to diagnose” and I was given a valium and sent home!!!!

This just further highlights the help I need.

** All stories shared on cureCADASIL are the patient’s personal account and does not reflect the views of cureCADASIL. Every patient has a story, and we want to share all stories for motivation and encouragement.