A Father and Husband Taken too Soon 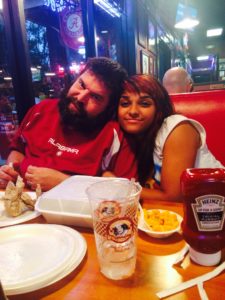 My husband had his first stroke in his 40’s when our daughter was 5. We changed eating habits and tried anticoagulant therapies but the strokes kept happening. The original neurologist basically gave up on us. So I finally talked my husband into going to the VA. The Neurologist there actually listened to us and wanted to know why an otherwise perfectly healthy man was having strokes. He had been to a conference that mentioned the disease and decided to test for it. The poor man had a time trying to find the code needed to test for CADASIL. The test came back positive for CADASIL.

I have been working in healthcare for years and I had never heard of what was killing my husband. My husband died after his 5th major stroke in 2016, our daughter was 15. It was on his Medulla and took away his ability to swallow. CADASIL can cause seizure disorder, memory loss, speech problems  (he would mix up “he” and “she” or words that rhymed), turned his personality into a child like state (he had been an officer in the military and a Supervisor at GoodYear for over 20 years), he had problems reading (he used to be an avid reader), and would get lost in his own neighborhood as well as confused easily. He had a countless amount of TIAs. His siblings are now having strokes as well. He had a niece who had a seizure disorder that she was born with that passed at 3, and the doctors believe it may have been related to the same genetic disorder that caused CADASIL.